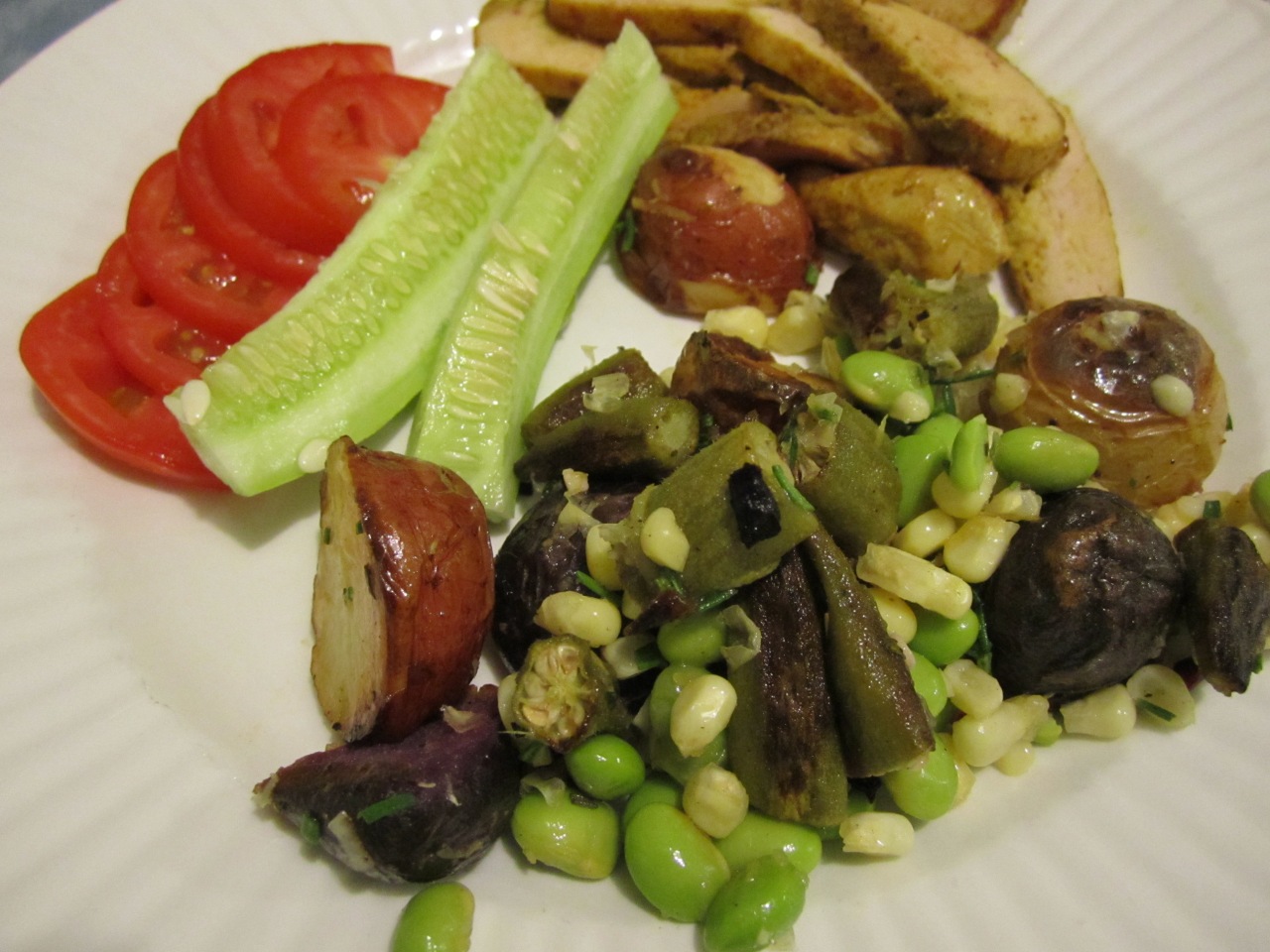 This recipe is so yummy that maybe I should change the name of my blog to “Nom Nom Nom”! I found the idea for this recipe roaming around the fabulous Epicurious site. I was on the scrounge for a different way to use up the bag of okra that came in the organic produce box this week. Okra can be slimy and disgusting so that means boiling is OUT of the question. (Apologies to all Southerners who love their stewed tomatoes and okra.) This recipe bakes the okra in a hot oven resulting in a sweet delicate flavor AND it doesn’t turn into a slimy glop. Win!

The following recipe is vegetarian and *very* filling. Baking the veggies results in a toasty goodness that is deliciously satisfying. My Official Recipe Tester (Steve) laments my vegetarian tendencies, so I added a leftover curry-spiced chicken breast to his plate. Verdict? Yes. Really good! Can I have more? 🙂

Wash baby potatoes and cut in half so they are roughly the same size (cook evenly). You want chunks that are pretty in the salad but small enough to eat in a couple of bites. Mince the leaves from two of the rosemary springs. Pour a couple tablespoons of olive oil into a 9″ x 13″ baking dish and dump in the potato chunks and minced rosemary. Add salt and pepper over the top and using your hands, mix the whole lot until the potatoes are coated in the olive oil. Place into the hot oven and set the timer for 20 minutes. When the timer goes off, stir the potatoes and put into the oven for another 15 to 20 minutes. 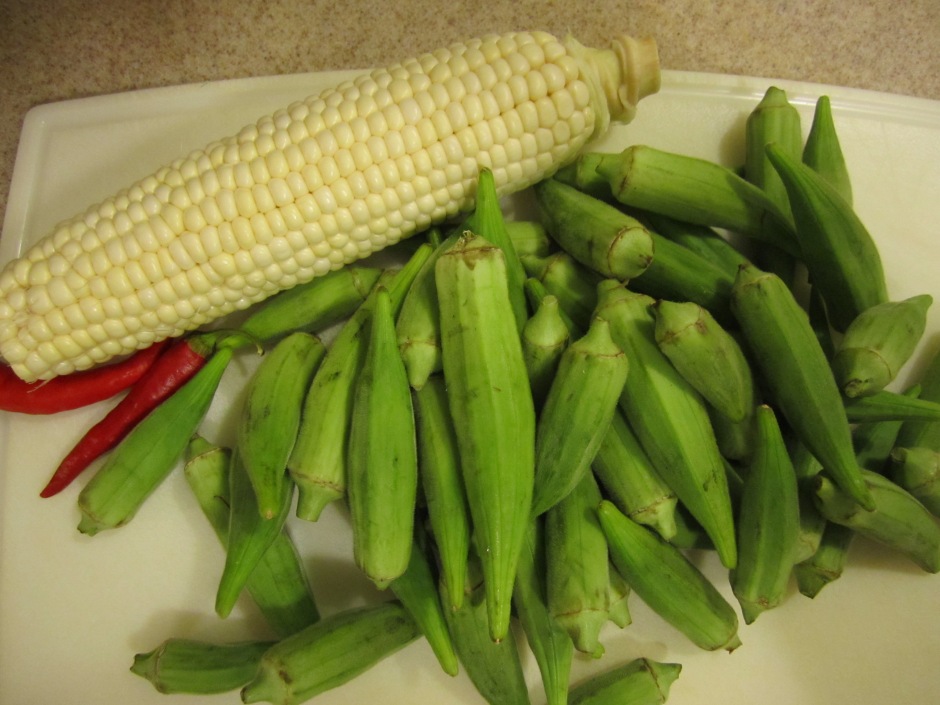 Fill a stockpot with water and heat to boiling. After the water starts to boil, toss in the edamame and blanch it for 5 minutes. Using a slotted spoon, pull out the edamame and run under cold water to stop cooking. Put the shucked ear of corn into the same hot water and put a lid on the pan. The corn will cook in the hot water while you complete the rest of the recipe. Shuck the edamame and place into a large serving bowl. 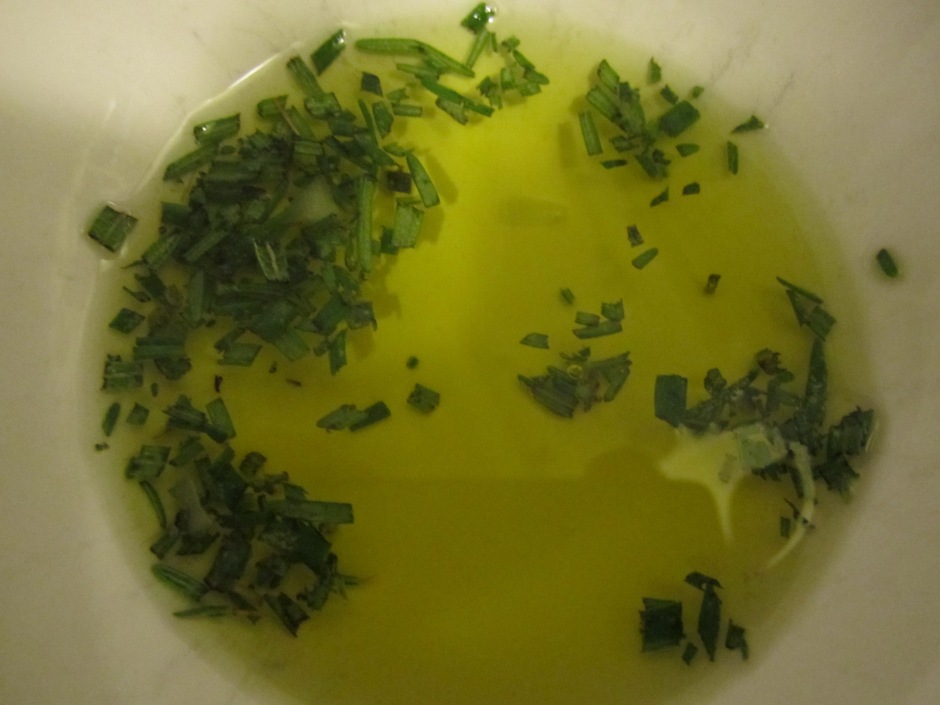 By now the potatoes should be done. Dump the chunks into the large serving bowl with the shelled edamame. (Ooooo, pretty!) Add a tablespoon of olive oil into the same baking dish and add the chunks of cleaned okra, diced peppers, and the minced onion. Toss to coat with the olive oil. put into the hot oven and set the timer for 10 minutes. When the timer goes off, gently stir the okra/onion mixture and put back in for another 5 minutes. Be sure to set your timer so you don’t accidentally burn the okra!

While the okra is cooking, pull the corn out of the hot water and cut the corn off the cob with a sharp knife. Dump the corn kernels into the salad bowl. When the okra is done cooking, put it into the bowl as well. Give the dressing another stir and pour over the warm veggies and gently stir to mix. Add more salt and freshly ground pepper to taste.

In the spirit of Julia Child who would have been 100 years old this week, Bon Appetit!